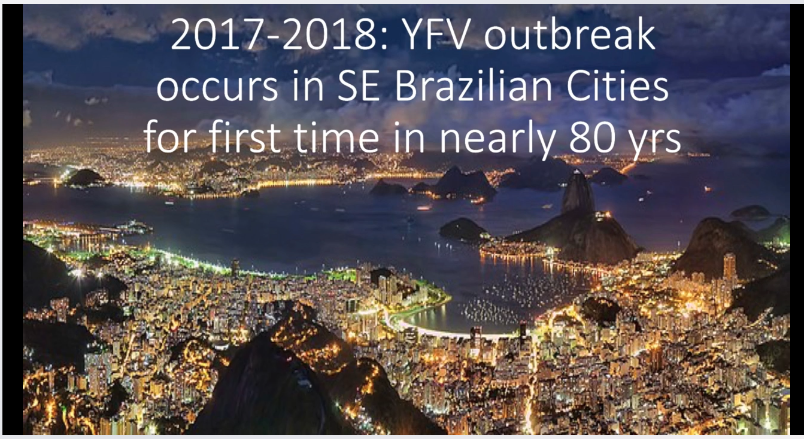 Providing a potential window into the complex ways climate change may affect disease risks, a new study presented Saturday at #TropMed21 linked the impact of severe drought on forest-dwelling mosquitoes in rural Brazil to a surprising outbreak of yellow fever two years ago in urban areas that had not seen the disease in nearly a century.

Joelle Rosser, MD, of Stanford University School of Medicine, said it can seem counterintuitive that severe drought can increase risks of infections with a mosquito-borne disease. She noted that mosquitoes “typically breed in pools of water, and yellow fever outbreaks typically start at the onset of a rainy season.”

Another perplexing fact, she said, is that the outbreaks that hit São Paulo and Rio de Janeiro in 2017 and 2018—causing over 2000 confirmed cases and 760 deaths—were carried not by the Aedes species of mosquitoes that had caused outbreaks in the early decades of the 20th century, but by a type found in forests called Haemagogus mosquitoes.

Dr. Rosser said a closer examination of the impact of drought on these forest-dwelling mosquitoes reveals how an area that had been largely free of yellow fever for almost a century—and where few people were vaccinated against the disease—was surprised by a sudden wave of infections.

She said the Haemagogus mosquitoes typically feed and breed high in the forest canopy. But stress caused by drought prompts the mosquitoes and howler monkeys that are their main source of blood meal—and that can help spread yellow fever—to descend in search of food and water. That movement provided greater opportunities for both the mosquitoes and monkeys to come into contact with humans. Dr. Rosser said there is also evidence that Haemagogus mosquitoes are capable of traveling long distances and that dehydrated mosquitoes may increase their biting rate.

Dr. Rosser said the recent yellow fever outbreaks in Brazil initially involved a spate of infections in 2016 primarily in farmers and other rural workers in sparsely populated areas of the state of Minas Gerais. These outbreaks coincided precisely with a spike in the drought index in the area, one that reached 2.5 on a scale in which 2.0 indicates extreme drought.

The drought likely prompted both the Haemagogus mosquitoes and howler monkeys to continue moving steadily farther south, she said, where they were likely to encounter larger human populations at the “rural/urban interface.” Moreover, the Haemagogus mosquitoes may have found it relatively easy to take up residence in Rio and São Paulo because aggressive efforts to tamp down populations of Aedes mosquitoes—which had been  causing outbreaks of dengue, chikungunya and Zika—decreased competition for urban habitat.

“The Aedes index was particularly low when this outbreak hit,” she said.

However, Rosser and her colleagues said that the reemergence of yellow fever in densely populated urban environments in Brazil raises the risk of reigniting an urban transmission cycle that could eventually involve Aedes mosquitoes.