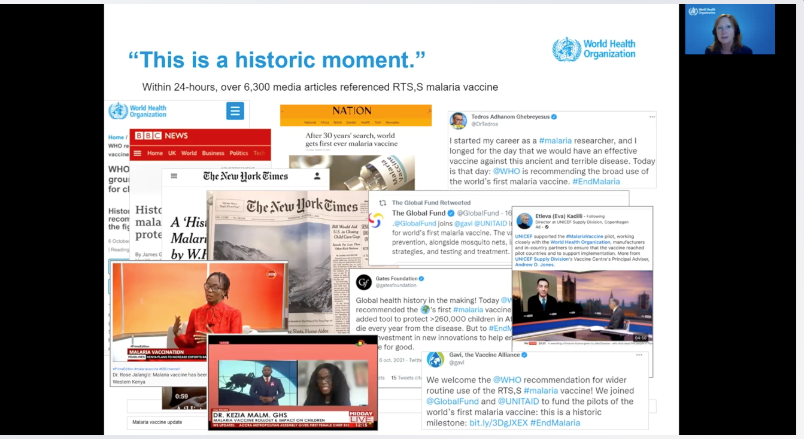 October 6 produced a historic moment when the WHO recommended widespread use of GSK’s RTS,S/AS01 (RTS,S) malaria vaccine among children in areas with moderate to high Plasmodium falciparum malaria transmission. The recommendation was based on a full review of scientific evidence, including evidence generated by the ongoing pilot implementation of RTS,S in Kenya, Ghana and Malawi.

“It was an exciting moment for our country to contribute to the WHO recommendation,” said Prof. Rose Jalang’o with Kenya’s Ministry of Health. She was speaking at a special symposium Friday at #TropMed21, where she and others reflected on the homestretch of a 30-year journey to develop the world’s first and still only malaria vaccine.

Prof. Margaret Gyapong, with the University of Health and Allied Sciences in Ghana, who was also closely involved with the pilot program, said there was a similar level of excitement in Ghana to finally see the vaccine cross this critical threshold. And John Tanko Bawa, with PATH, described a feeling of “euphoria” amongst the team working in Malawi.

“The announcement could not have come at a better time,” he said, because it has “helped amplify the importance of vaccines” and global collaborations in the midst of a global health crisis.

An Vermeersch, Vice President and Head of GSK Vaccines Global Health, said people who worked decades ago with GSK on this vaccine were calling to say how happy they were to hear the news.

The discussions at the symposium noted the key findings behind the WHO recommendation, including the fact that RTS,S:

Eliane Furrer, with the WHO said it was remarkable that the pilot implementation stayed on track even in the midst of the COVID-19 pandemic.

“Vaccine uptake rapidly bounced back after (initial) disruptions,” she said, demonstrating the resilience of the infrastructure established in the participating countries alongside strong community demand.

Prof. Jalang’o said the rollout of RTS,S in Kenya has generated a number of co-benefits. That includes strengthening the country’s vaccine “cold chain” capacity that will help support other vaccines, including introduction of COVID-19 vaccines. She said the effort also has provided an opportunity to better train health workers in recognizing and reporting vaccine-related adverse events.

Dr. Don Mathanga, a researcher with the University of Malawi College of Medicine, presented evidence showing that the RTS,S pilot introduction did not have any negative impacts on other malaria prevention tools, like insecticide-treated bednets. And he said there are indications that the RTS,S vaccine could help fill gaps in coverage with other interventions.

Malaria remains a primary cause of childhood illness and death. Despite improvements in recent years, progress in the fight against this disease has stalled and COVID-19 disruptions are likely to have worsened the situation. The RTS,S malaria vaccine offers a new tool that is expected to accelerate malaria progress and improve child survival if introduced broadly as part of an optimal mix of malaria control tools.

With the recommendation in hand, next steps include global funding decisions to support the scale-up of the vaccine. At the same time, countries themselves will have to make decisions about whether, and when, to introduce the vaccine.

You can find out more about the RTS,S malaria vaccine, the pilot programs and the recent policy decision here.