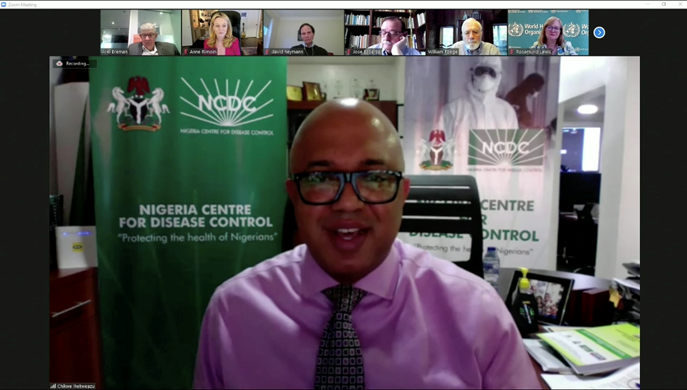 Veterans of the battle against smallpox marked the 40th anniversary of its eradication Monday at TropMed20 with laments that the lessons from that fight were not followed in the battle against COVID-19—while taking a fresh look at the risks posed by a related and re-emerging pox virus.

“Every lesson (from smallpox) was violated with coronavirus in the United States,” said Bill Foege, MD, MPH, the former director of the US Centers for Disease Control and Prevention (CDC) who was instrumental in making smallpox the only human disease ever to be eradicated. Foege has criticized the US COVID-19 response for its lack of planning, reliance on science and coordination with global partners. He said the failures are evidence that while smallpox eradication left a clear roadmap for combatting a major epidemic,  “lessons learned can be unlearned.”

For example, he said a key lesson from the smallpox fight is that successfully battling an outbreak requires governments to “seek the truth.”

“You can’t do anything about a disease if you don’t know the truth,” he said. “And with the COVID-19 pandemic in the US, we have trouble getting the truth.”

Down Goes Smallpox, Up Goes Monkeypox?

One unintended outcome of smallpox eradication is that discontinuing smallpox vaccination may be contributing to a recent increase in monkeypox infections in Nigeria and the Democratic Republic of Congo (DRC). Monkeypox is closely related to smallpox and, while not as deadly, the smallpox vaccine provided a significant level of protection.

Chikwe Ihekweazu, MD, MPH, Director General of Nigeria’s Center for Disease Control, recounted the surprising discovery in 2017 of a monkeypox infection in an 11-year old Nigerian boy. It was the first case documented in the country since the 1970s, he said. Nigeria has since identified 450 “suspected cases,” 190 of them confirmed, and ten fatalities.

Ihekweazu said despite the name, there is no evidence the recent monkeypox infections in Nigeria involved contact with non-human primates. He said his agency’s experts have identified isolated instances of human-to-human transmission, including a small cluster in a prison, but that “it’s not very efficiently transmitted from person to person.” He said that overall, the- emergence of monkeypox in Nigeria has presented a mix of worrisome and puzzling facts.

Ihekweazu said while it’s clear that monkeypox is “not a rare disease,” epidemiologists in Nigeria are still trying to gauge the “size of the problem” and determine whether there are potential animal sources of infections.

“We are finding a trickle of cases, but not the numbers we expected to see after that first outbreak (in 2017),” he said. “There was the re-emergence, then almost a disappearance.”

Anne Rimoin, PhD, MPH, an epidemiologist and monkeypox expert at the University of California, Los Angeles, said the case-fatality rate from infections can range from one to ten percent. She said that prior to 2000, there were very few cases seen in sub-Saharan Africa outside of the Democratic Republic of Congo (DRC), where monkeypox has been a persistent challenge. But, in addition to the Nigeria outbreak, she said in recent years there have been cases reported in other countries, including the Central African Republic and Liberia, and an increase in cases in the DRC.

Rimoin pointed to a comprehensive study from 2010 “documenting a major increase in incidence 30 years after smallpox vaccination ceased.” She said the vaccine likely provided “82% protection against clinical infection” with monkeypox.

Debating the Fate of Smallpox Stocks Held in US, Russia

Dr. Rosamund Lewis, head of the Smallpox Secretariat at the World Health Organization (WHO), said debate continues regarding the risks and scientific benefits of preserving the two remaining stocks of smallpox virus, one held by the CDC in Atlanta and the other by Russia’s State Research Center of Virology and Biotechnology (VECTOR) in Koltsovo.  In 2011, the WHO’s World Health Assembly re-affirmed its position that the remaining stocks should be destroyed due to risks of an accidental exposure or that they might fall into the hands of bioterrorists.

However, Lewis said WHO is now revisiting the issue in the wake of evidence that advances in synthetic biology raise the possibility smallpox can be reconstituted from scratch—and the remaining stocks might be needed to develop tools to combat such a threat.

“We have learned that the risk of re-emergence of smallpox has increased, not due to laboratory concerns but due to synthetic biology,” Lewis said.