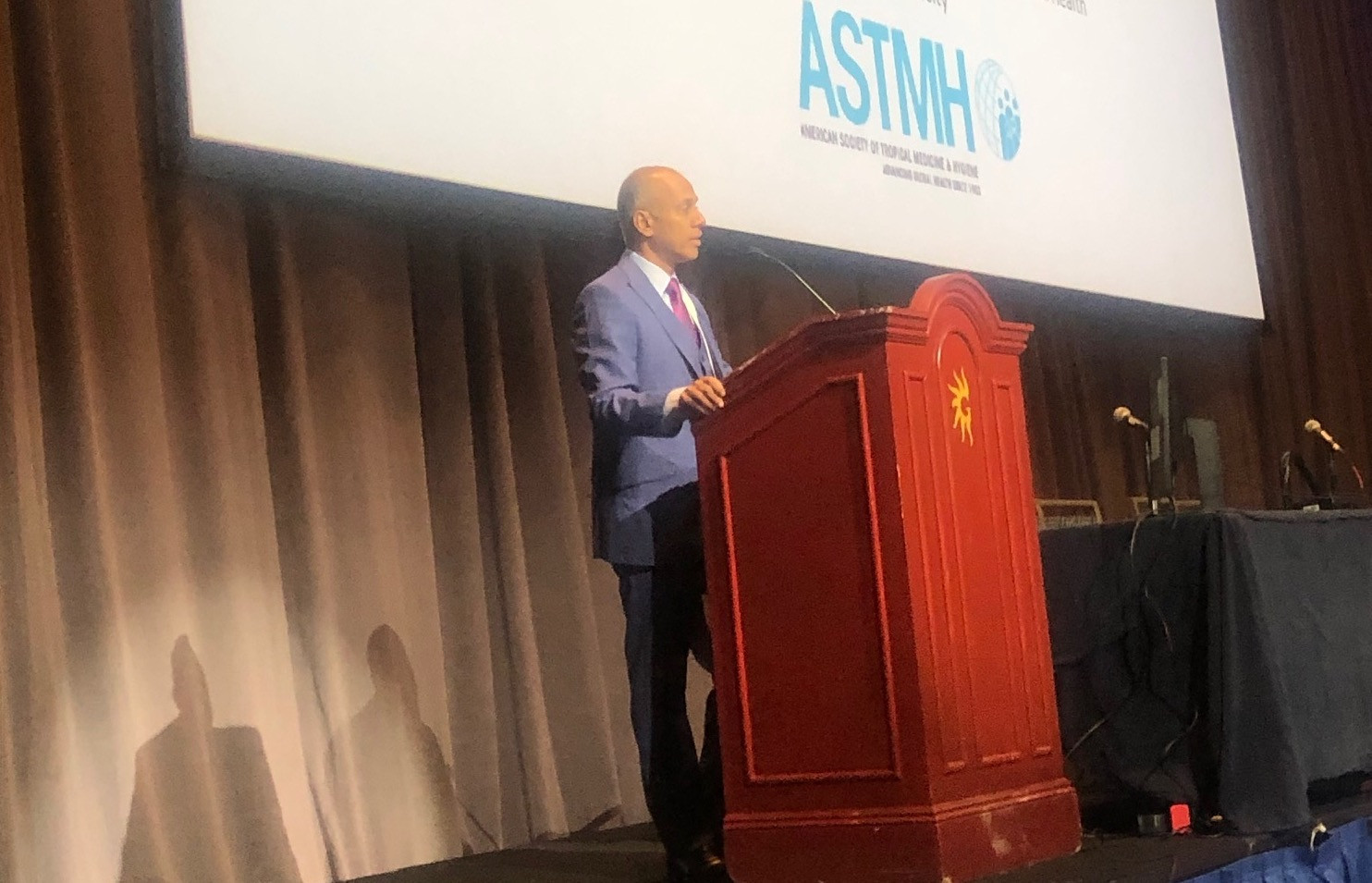 With a rhetorical flourish that was literally poetic, outgoing ASTMH President Chandy C. John, MD, MS, FASTMH, delivered a stirring President’s Address Saturday night in which he urged members to seek out and celebrate the small achievements that their work can bring.

Dr. John, director of the Ryan White Center for Pediatric Infectious Diseases and Global Health at Indiana University School of Medicine, noted, “As a Society, big S, and society small s, we are at a crossroads where what we do and what we stand for will make a great difference for the future.” But he implored his colleagues that as they contemplate the big changes that need to happen, they also embrace the “small things we can do every day.”

He said that while he has worked throughout his career to achieve major outcomes against malaria, he also takes pride in seeing that individual child get better, in working with smart students, residents and fellows and learning new things that can illuminate some aspect of the disease.

“Each of these has its worth,” he said. “We never stop aiming big, but every day we can do something small that matters.”

After reviewing his work with ASTMH over the last year—which included increasing engagement and retention of trainees and low- and middle-income members; moving toward certification of a medical specialty in global medicine; and increasing funding to support these efforts—Dr. John departed from the conventional President’s Address. He decided to indulge his passion for writing poetry.  And he offered a series poems that he framed as an effort to “communicate ideas and moments, and the meaning behind the things we do.”

He started with poems that focused on “who we serve,” which he said were something of a call-back to the opening keynote from Abhay Band and Rani Bang and a conversation Friday with NIH Director Francis Collins about the importance of keeping patients as the focal point. His tribute to “the emaciated boy with a skull fracture” included the following:

Your smile undid me

At once, I was not a doctor

Deducing the cause of your fever

In a poem entitled simply “Malaria,” he worked to capture the wonder and passion of trying to subdue a terrible foe, envisioning it as a threat to his family.

I will decode the spiky messages

That trapped my mother

I will deflect the probing fingers

That snared my father

I will defuse the hidden landmines

That maimed my brothers

I will expose each precious weapon

Until you have nothing left

This is a blood battle

And of course, no one could lay claim to being a bard of biomedical research without an ode to rejection letters.  John’s referred to complaints from editors about font sizes, about findings that were either different or the same, and a wry observation about the perils of being too thorough.

Since you pointed out the flaws, we’re agreeing with them

He said a poem entitled ”The day I learned my Dad was Superman,” about seeing his dad after he had suffered a heart attack,  was meant as a meditation on mentors and “all the things your mentors had to deal with that you didn’t know about.” In the poem, he talks about seeing his father’s “washed out” face and how it was:

So tired, so stubbornly brave

That I burst into tears

Because I knew then

He ended with poems that invited his colleagues to think about “why we do what we do” and how to connect their work to larger problems facing the world today.

A poem about an encounter in a lake that startled a loon recalled how the bird quickly regained its composure, “his calls measured and regular again.” John said he wanted the poem to convey the importance of “being honest about our weakness” so that the next generation of scientists do not feel there is “something impossible to measure up to.”

I, too, must remain

But let me tell you this:

In that one brief moment of fear

He closed with a poem entitled “Let us not speak tonight of eternity” in which he asked his audience to consider instead “blood-red cardinals swooping into fiery orange canopies.”

Sink into the beauty before you

And tell me your pledge to this sacred world