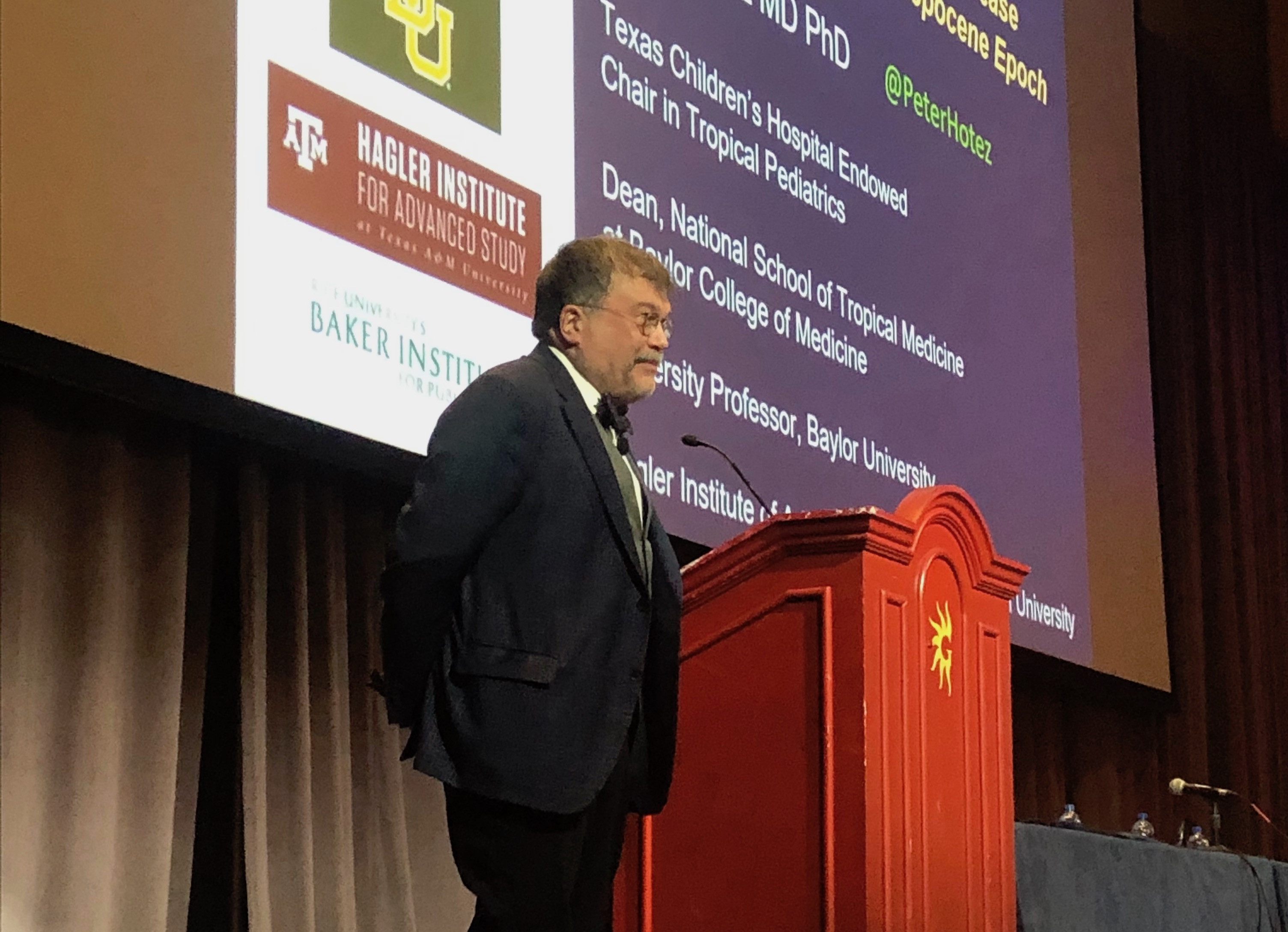 Two decades after making amazing progress against vaccine-preventable diseases and experiencing a global awakening—and a surge of action—to drive down a host of neglected tropical diseases, a confluence of forces are coming together to create a dangerous new era of “Anthropocene disease drivers.” And these forces—which include poverty, climate change, war, political collapse, urbanization, and the virulent spread of anti-science sentiments—already are manifest in the emergence of new infectious disease hotspots around the world, including here in the United States.

That was a key message delivered Thursday night by former ASTMH President Peter J. Hotez, MD, PhD, FASTMH, Dean of the National School of Tropical Medicine at Baylor College of Medicine, at the TropMed19 Fred L. Soper Lecture. His use of “Anthropocene” is a reference to a concept becoming increasingly popular that the earth has entered into a period in which human activity now dominates and shapes the planetary ecosystem. And Hotez believes it’s an epoch that could witness a reversal of so much of the good work accomplished by initiatives like the GAVI vaccine alliance, the Global Fund to Fight AIDS, Tuberculosis and Malaria, and the effort to provide mass drug chemotherapy for NTDs.

“We are making incredible progress,” Hotez said. “But we are being countered by this incredible rise of Anthropocene forces.”

There was no mistaking the gravity of his presentation, which included disturbing evidence of everything from vaccine deniers driving measles outbreaks in the United States and Europe, a political meltdown sending malaria rates soaring in Venezuela,  and armed conflict creating a rise in cutaneous leishmaniasis in Syria, cholera in Yemen and polio in Nigeria. But Hotez brought a spirit of upbeat enthusiasm to his call for creating a new “ecosystem” of advocacy and communication in the typically “inward looking” world of scientific research.

“We are so inward looking that we have lost our interest in public engagement,” Hotez said. He said the message when he was rising through the ranks was to stay away from advocacy. But Hotez believes it’s now time to “flip that around” and build science communications into the programs now training the next generation of researchers, many of whom, he said, are eager to engage with the wider world.

Hotez listed many of the ways the Anthropocene disease drivers are having an ominous impact.  They include the fact that of the 20 million kids today who are missing out on vaccinations, almost half are in countries riven by armed conflict, which also are the places with the highest burden of neglected tropical disease. Meanwhile, in wealthy countries, anti-science attitudes are driving more and more parents to refuse to vaccinate their children, causing measles outbreaks in the Europe and the U.S. The anti-vaxxer movement, which has vilified Hotez, has become so successful at weaponizing their disinformation that the WHO has listed “vaccine hesitancy” as among the top 10 global health risks of 2019.

But Hotez does not see all these various drivers acting in isolation. He believes that while the interactions are not always clear, there seem to be connections. For example, he noted how climate stresses that cause agriculture systems to collapse in poor countries drive rural population into urban areas, creating political instability and intensifying poverty, which can in turn can feed conflict.

He said the need to unpack the social, political, climatological, and biological forces that are feeding a rise in infectious diseases requires biomedical researchers to start collaborating more often “with people outside of your specialty.”

Hotez lamented the tendency to “incentivize” scientists to adopt a narrow focus. Instead, he said, “We have to find a way to create a dialogue.”