The Profound Public Health Impact of “Research With the People” 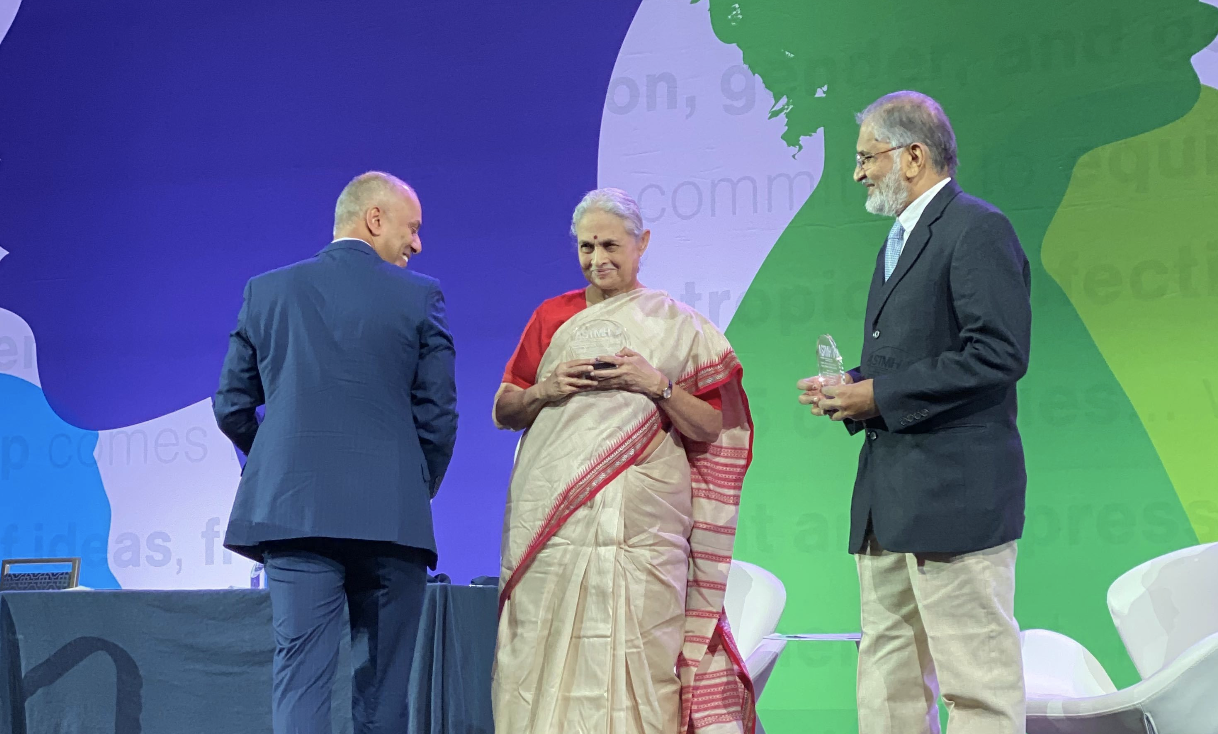 Don’t conduct research on people, do it with people. And if you want to make a difference in women’s health, you need to first listen to women. Those were the simple, solemn and moving messages from public health power couple Abhay Bang, MD, MPH, and Rani Bang, MD, MPH, who kicked off the opening session of #TropMed19 with a pair of pair of insightful keynotes based on their influential work conducting research and providing health services for impoverished populations in remote villages of Maharashtra, India.

Abhay Bang is perhaps best known for leading a groundbreaking study on the impact of home-based newborn care that achieved dramatic reductions in neonatal mortality and provided a model that has been adopted across India and in several other countries as well. Rani Bang is a physician-scientist whose insights into the gynecological challenges facing women in rural India has transcended conventional biomedical research to provide lessons relevant for social activists, anthropologists and policy makers who want to make a meaningful impact on maternal and child health.

Research that Enriches People, Not Scientists

Abhay Bang recounted his early work in rural India, where he was surprised that his discovery of a significant population with sickle cell elicited no action from the government and no interest from the community he was studying—even as it earned accolades from his professional peers.

He recalled tribal leaders telling him “sickle cell is not our problem, it’s your problem.”

Abhay and Rani shifted gears and embarked on an effort to learn what local people considered to be their biggest health problems. They even conducted formal voting. The issues included malaria, low back pain, alcohol abuse, childhood deaths and, for women, white vaginal discharge.

Based on these insights, they decided to focus on childhood mortality and specifically neonatal deaths.

One of the things the Bangs discovered is that most women in rural India gave birth at home and were then left isolated with their babies with no help if their newborn got sick. By training local women to recognize and treat potentially deadly problems like sepsis, neonatal deaths in the villages plunged from around 62 per 1,000 births to 26. Last year, 11 million newborns in India received the kind of home-based care pioneered by the Bangs.

Abhay Bang said the success of this work can be traced to the fact that they basically followed the advice of the ancient Tao Te Ching to “go to the people, live among them, love them, listen to them, learn from them.”

Abhay’s wife Rani found a similar approach produced a breakthrough in her efforts to provide better health services to women. She said that when she started letting women explain to her what they saw as their chief health problems, she became much more effective at helping them deal with their burdens.

For example, she was once exasperated that a woman in her clinic would not speak about her gynecological problems, but just kept holding up two fingers. She later learned it was a sign for a collapsed uterus. Local women were so ashamed of the condition that they would refer to it only with sign language.  She also found they would not say they were experiencing a white discharge, but just “weakness.” And they would not say they were infertile, only that they had “black-colored menses.”

She learned that most abortions in the village were only available from illegal providers who also demanded sex before and even after the procedure. And she found that filariasis, a parasitic roundworm disease most often associated with swollen legs, also causes swollen breasts in women.

“We doctors, when we wear our white coats, we think we know everything,” she said. “We never try to understand the economic or social issues of the people (we’re treating). I thought that, if I want to help educate people, I must first educate myself. So listening to women became my mission.”