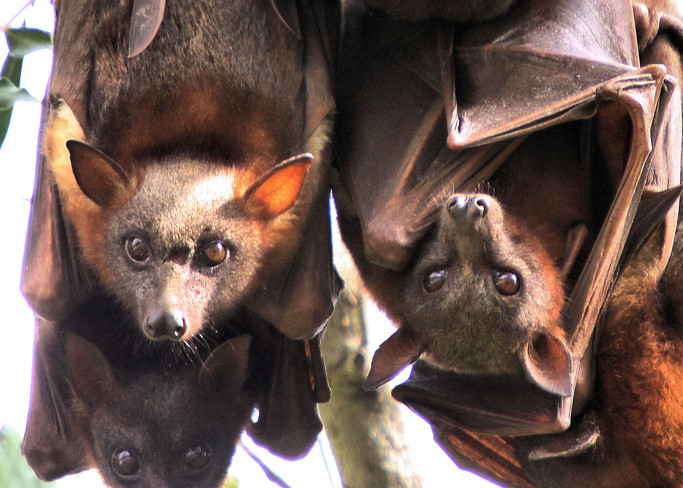 Photo: Fruitbats like these flying fox bats are a potential source of Nipah virus infections in humans and may have been the source of the initial infection that led to an outbreak in India earlier this year. Infectious Diseases, Global Health & Disease Outbreaks 10.31.18

While today Ebola is by far the most—and some might argue only—publicly recognizable viral hemorrhagic fever (VHF), there are several other members of this family of diseases that have shown troubling signs of becoming a threat as well.

Monday afternoon, scientists at TropMed18 turned their attention to two VHFs that have been causing concern of late: Lassa fever and Nipah virus.

Govindakarnavar Arunkumar of India’s Department of Health Research reported on a probe of a Nipah virus outbreak in India that occurred in May of this year that involved 23 infections and 21 deaths. That high fatality rate is unfortunately becoming typical of Nipah virus and is a reason the disease has global health authorities on edge. The virus, which can be transmitted by pigs and bats—but also by humans—can cause severe respiratory illness and fatal encephalitis.

Arunkumar noted that most of the infections occurred in hospital settings and involved people who had come into contact with a single, index case—a young man who may have originally picked up the infection from fruit bats. Public health authorities ultimately intervened to isolate patients and conduct intensive contact tracing, which identified 2642 potential contacts. They were kept under close surveillance, and there were no new cases reported after May 30.

Arunkumar and his colleagues believe the presence of pronounced respiratory symptoms likely contributed to the spread of disease. They found that only people who were directly exposed to a patient’s coughing contracted the virus. (However, other reports of Nipah virus infections have been similar to what has been seen with Ebola, in that the transmission has been linked to handling the corpse of an infected person.)

The apparent transmission of such a deadly virus in droplets spread by coughing underscored the public health threat posed by Nipah virus. According to Arunkumar’s assessment, “any delay in containment would have resulted in increased human-to-human transmission” and more deaths.

Investigating a Spike in Lassa Fever

Harvard’s Katherine Siddle discussed the results from an exhaustive investigation trying to understand why, in early 2018, Lassa fever infections suddenly spiked in Nigeria. Lassa fever is typically caused by contact with infected rodents, often via food that has been contaminated with their feces or urine. For most people infected with Lassa fever, the disease produces only mild symptoms. But about 20 percent of infections progress to serious illness that can be fatal. The disease is especially hazardous to pregnant women and their unborn children.

Siddle said that it’s common to see a modest increase in cases in Nigeria every year during the dry season, but the increase in 2018 was far beyond the norm. There were 523 laboratory-confirmed cases from January until early October and 135 deaths, compared to 143 total cases for all of 2017 and 71 deaths. She said this “very pronounced increase” of Lassa fever infections, a disease she said is an “old virus” that has been circulating in Nigeria for at least 1000 years, raised questions about whether something about the virus had changed to make it more transmissible.

But after an extensive analysis of Lassa virus genomes isolated from patients from both 2017 and 2018, Siddle said scientists could see nothing distinctive about the 2018 virus samples that would explain the apparent surge of infections. She said researchers are now considering whether there might have been ecological changes that led to more contact with infected rodents, or simply an increased awareness of the disease that prompted more people to seek treatment and better diagnosis.