blog
ASTMH Annual Meeting 2022 / All Blog Posts / Anticipating the Next Health Emergency: It could be Ebola, Influenza—or a Disease “Not on Anyone’s Radar”

Anticipating the Next Health Emergency: It could be Ebola, Influenza—or a Disease “Not on Anyone’s Radar” 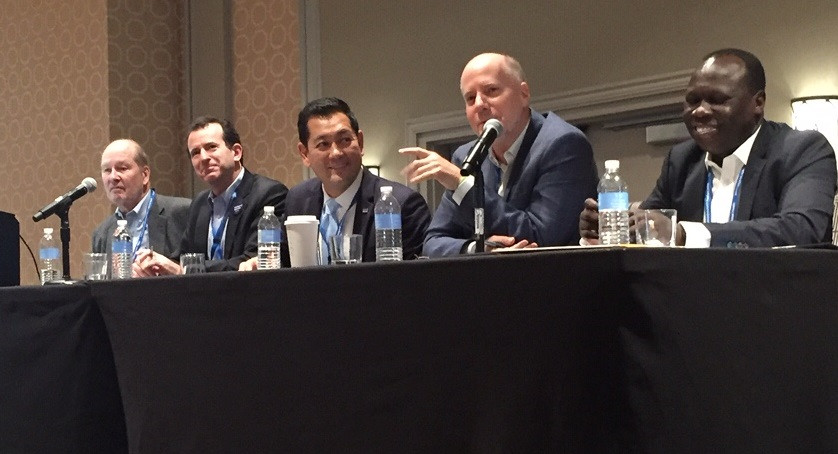 When asked Monday at a session on “tackling outbreaks” at TropMed18 to predict what potentially could be “next big one,” ASTMH Scientific Program Chair Dan Bausch, who heads the United Kingdom’s Public Health Rapid Support Team and is an Ebola expert, was quick to focus on the disease he knows all too well.

“I worry a lot about what’s going on in the DRC right now with the Ebola outbreak,” Bausch said. “We have a very dangerous disease in an area of incredible insecurity….There are estimates of 75,000 people crossing the borders between Uganda, Sudan, DRC, Rwanda and Burundi on a daily basis. So you can imagine a worst case scenario.”

Bausch said he “did not want to be alarmist,” but he’s concerned about a situation “where we could have tens of thousands of cases” of Ebola in an area where there are too many armed groups vying for control to permit an aggressive intervention.

The impact of armed conflict on fueling outbreaks was underscored by Zabulon Yoti, Regional Emergency Director for the Africa office of the World Health Organization. He noted that the initial outbreak in the DRC earlier this year occurred in an area that was relatively secure and stable. And it was quickly contained though a combination of interventions that included immunizations and a new experimental Ebola vaccine.

But in the volatile area where new infections are now occurring, he said, the staple of Ebola outbreak response—“contact tracing” to identify everyone who may have had contact with an infected person—has “dropped below 80 percent.” That means health authorities are losing their ability to map the potential trajectory of infections and prevent new ones .

Yoti and others on the panel noted that Ebola is understandably one of several diseases that have the potential to flare into a significant outbreak.

Yoti said high on his list of concerns is Yellow fever. He pointed to the 2016 Yellow Fever outbreak in Angola that also touched on the DRC, but was ultimately contained. An alarming feature of the outbreak, he said, was the infection of Chinese workers in Angola who returned home with the infection. While the mosquito-borne disease did not spread in China, Yellow fever, which can progress to a “toxic phase” that has a high fatality rate, would have been a major problem if it did. Because it is not considered to be a risk in China or elsewhere in Asia, some 2 billion people in the region are not vaccinated against the disease and would be vulnerable to infections.

Ray Arthur, with the Global Disease Detection Operations Center at the U.S. Centers for Disease Control and Prevention (CDC), cited the threat of a dangerous strain of influenza, given how easily the disease spreads and the lack of universal vaccination. He also said the next big threat easily could be something no one expects, like recent outbreaks of Zika and Middle East Respiratory Syndrome-Corona Virus (MERS-CoV) that “were on no one’s radar.”

Cyrus Shahpar, who leads the Prevent Epidemics Team at the NGO Resolve to Save Lives, gave a brief overview of current threats that revealed how many different diseases are currently a potential outbreak risk in different parts of the world, in addition to Ebola. Diphtheria, cholera, dengue, monkey pox, and Lassa fever were on his list. Regardless of the disease involved, he sees the “perfect storm” being one that involves a highly transmissible infection in urban areas of developing countries that have experienced rapid and uncontrolled population growth.

Paul Spiegel, director of the Center for Humanitarian Health at Johns Hopkins University, said the recent spread of cholera in Yemen linked to a Saudi-led military offensive, offers an unfortunate reminder that the a major disease outbreak can occur and still receive little media attention.

He said Yemen has one of the largest civilian populations in the world currently experiencing outbreaks of disease and other deadly threats caused by armed conflict, “yet it’s not making news.”